Drought is a devastating natural hazard, due to the negative effects of the climatic change, the percentage of the planet affected by drought has more than doubled in the last 40 years (FAO).

Water deficit in plants is considered as one of the major abiotic stresses (Jaleel et al., 2009). Plants exposed to severe drought experience changes in metabolic functions such as losses of photosynthesis pigments. Lower photosynthesis rate means low plant biomass and consequently a reduction in yield.

Plants have different mechanisms to avoid water deficit. Among them, stomatal conductance is reduced as part of the systemic response triggered by a signal that originates in the root system. One of these responses is the production of abscisic acid (ABA) (Mata and Lamattina., 2001)

Another plant response to low water conditions is to modify the cell wall proteins to avoiddehydration (Verslues et al., 2006).

The application of bio stimulants, like Amino Acids, can assistthe plan to resist drought stress. Amino Acids are the building blocks for protein production. Studies have established that even low doses of amino acids help reduce the impact of drought stress (Mohamed 2006) and improve the uptake of essential nutrients (N, P and K)under low water conditions.

The plant response to drought is similar to the plant response to salinity stress as they both relate to low water potential. Various studies show that Arginine, Proline, Isoleucine, Leucine, Histidine and GABA can mitigate against the effect of drought and salt stress

While underestimated, minerals such as Silicon (Si) can greatly assist in mitigating drought stress. Although silicon is generally considered nonessential for plant growth, silicon uptake by plants can alleviate both biotic and abiotic stresses (Yongxing Zhu and Haijun Gong 2013).

Osmotic pressure plays a fundamental role in water stress responses and growth in plants (Osakabe et al., 2013).Free amino acids are osmotically active substances that contribute in osmotic pressure adjustments during drought. Exogenous application of amino acids modulate membrane permeability and ion uptake which is how amino acids mitigate drought or even salt stresses. A study in corn revealed up to 30% more yield (in terms of mass per 1000 grains) when sprayed with amino acid under water deficient conditions (Kasraie et al., 2012). The study revealed that spraying of amino acids before water deficient stress is up to 20% more effective than spraying amino acid after water deficient stress. Another study on wheat revealed that amino acid reduced damage due to stress by 70% when applied at a concentration of 1 mL per Liter (Azimi et al., 2013).

Although Abscisic Acid (ABA) is the most studied stress-responsive hormone, the role of cytokinins and auxins during environmental stress is emerging(Peleg and Blumwald 2011). 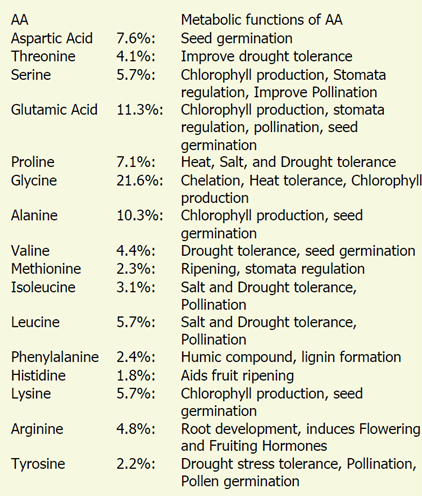 Studies have shown that in combination, amino acids and kelp compliment and augment one another to produce a result that is better than the sum of the parts.

AminoKelp™ has been designed to be used in all the different types of crops as it helps plants to build resilience and overall vigor. It also helps the crop to deal with both biotic and abiotic stress e.g. insect attack, foliar and root disease, drought, frost, heat sunburn etc.

AminoKelp can be applied as either a foliar, down the line at planting or through fertigation. Amino Kelp can be applied individually or with most commonly used pesticides, however we strongly recommend checking labels for compatibility as well as pretesting in a small area prior to widespread application.

You may be interested in these Grow Green products.